Under the terms of a Power Purchase Agreement, MMA Renewable Ventures, LLC owned the panels, and leased the land at no cost and Nellis Air Force Base. Nellis agreed to buy the power for 20 years at about 2.2 cents/kWh, instead of the 9 cents they are paying to Nevada Power, saving the Air Force $1 million each year. None of the $100 million cost came from the Air Force, but instead from subsidizing taxpayers and Nevada Power customers who are paying for the RPS credits. 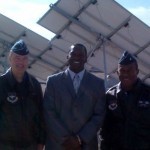 The Nellis Solar Power Plant is located within Nellis Air Force Base in Clark County, Nevada, northeast of Las Vegas. The Nellis solar energy system generates in excess of 25 gigawatt-hours (90 TJ) of electricity annually and supply more than 25% of the power used at the base. The system was inaugurated in a ceremony on December 17, 2007, with Nevada Governor Jim Gibbons activating full operation of the 14 megawatt (MW) array.

Occupying 140 acres (57 ha) of land leased from the Air Force at the northeastern corner of the base, this ground-mounted solar system employs an advanced sun tracking system, designed and deployed by SunPower.

The system contains approximately 70,000 solar panels, and the peak power generation capacity of the plant is approximately 13 MW AC. This means the ratio of average to peak output, or capacity factor, of this plant is around 22%. The energy generated will support more than 12,000 military and civilians at Nellis who are responsible for Air Force advanced combat training, tactics development and operational testing. Construction began on April 23, 2007, and operation of the first 5 MW began on October 12, 2007.